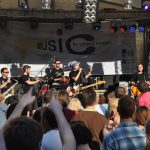 Better late than never! After a period of recreation, that has been longer than expected, I want to say Thank you to all the people, who have made the stage at Lutherplatz possible! But mainly, I’d like to thank a great audience, which cleaved to the brass band even though it was raining heavily. The audience danced the rain away! Hopefully, there will be a Lustgarten again at the next BRN birthday! Until then: Bunte Republik never stops. (Mirko Sennewald)

Unlimited enjoyment of music! Even though the visitors have to abstain from the Lustgarten festival at this year’s BRN, Kultur Aktiv presents some highlights of its work on the rock stage at Lutherplatz/corner of Pulsnitzer Str in co-operation with Café Neustadt. The event’s focus is music from the Balkan. In the framework of the project “Music without Borders”, three different bands present various kinds of music from their homes,bands from Dresden will play in addition.

“Das Rejdz” from the city of Vukovar/Croatia,that has been almost completely destroyed during the civil war, present current hits out of the alternative dance floor and own songs.

“Superhiks” from Macedonia have been connecting traditional sounds and Ska music very successfully for years. They’ve already elated the audience at the Lustgarten 2007 as headliners.

“Vranjski Biseri Orchester” (engl.: „the pearls of Vranje“) are from the Southern Serbian city of Vranje, which is an important center of Balkan Brass music. Boban Markovic and others originate from there. By the way, Vranje owns the only Brass memorial in the world. The town’s pearl plays somewhere else every day and atbthe BRN on 6/16!