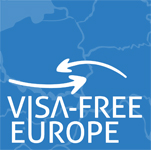 „Whoever wants to visit Germany often has a tough time” says Mirko Sennewald, chairman of Kultur Aktiv. The cause for that are the barriers related to the visa application. Since the travelling agencies do the applications, this doesn’t affect mass tourism as much as it affects individual travel and –despite the simplified rules- also artists, scientists and athletes. Thus Kultur Aktiv has decided to join the pan-European initiative “Visa-free coalition”.

Sennewald points out that “unfortunately, we consistently face various difficulties during our running work”. For instance, the exchange between Kultur Aktiv and the Ukraine was paused during the past six years, since Ukrainian activists had been dismissed by the embassy in Kiev again and again. “They weren’t bandits, as one may suppose, but honorable persons, such as the director of the civic museums of a Western Ukrainian City, an art professor and artists, who’ve been to the European Union before”, Sennewald explains. Kultur Aktiv’s present volunteer from Armenia arrived in Dresden several weeks late, after she filled in a wrong form notwithstanding the embassy’s duty to advise her. “This affects us financially and leaves gaps we have to refill by using other resources”, Sennewald continues.

Thus Kultur Aktiv has joined the pan-European initiative “Visa-free coalition”. We are the third German member and the only one from Dresden by now. Thereby Kultur Aktiv wants to send a signal and calls up other NGOs and initiatives for joining the initiative as well in order to spread the call for visa dispensation.

The European neighboring states with visa requirement include Belarus, Ukraine, Moldova, Georgia, Armenia, Azerbaijan and Russia. Vice versa, for German citizens there are visa requirements in Belarus, Azerbaijan and Russia. The rest of the states have already abolished them. Especially Georgia registers a boom especially in the tourist sector by now.

Sennewald is also appreciative of the general public’s anxiety, but clarifies: “Visa requirement couldn’t stop cross-border crime by now, since those, who cash in on it have always found ways to cross the borders.” Visas are not an effective instrument to replace wanting staff in the border region.