From 12 to 18 November , Caucasian guitarists Gagik Arakelyan and Robert Melkumyan stayed in Dresden. Both guitarists have performed at the opening event to “Unity & Splitting” on Friday, 11/13/2015 in the former Gallery Treibhaus, Katharinenstraße 11-13, 01099 Dresden. They also have used their time in Dresden to get into interaction with local musicians. Both will be accompanied by choirmaster Nina Grigoryan. Here you can see first photos:

Sunday 15th November:
11:00 am – excursion to Meißen, visitation of cathedral and castle

Gagik Arakelyan & Robert Melkumyan are versatile experts of their instrument with a repertoire of different rock varieties to jazz and blues to folk. Gagik counts guitar idols like John Scofield, Steve Vai, Ritchie Blackmore, Allan Holdsworth to his faves. His student Robert is heavily influenced by bands like Radiohead, Muse, The White Stripes and Pink Floyd. Also interesting are their bonds in the traditional Armenian music, which they present with their own arrangements. 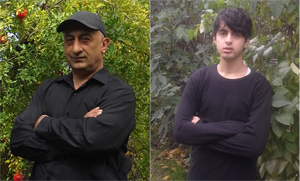 Both will be accompanied by choirmaster Nina Grigoryan. Her excellent choir has already realized successful guest performances in France, Spain, Austria and Russia. She could use her time in Dresden to come into contact with Dresdner choirs and choral music. Meetings with Prof. Ekkehard Klemm (College of University of Music Carl Maria von Weber Dresden, artistic director of the Singakademie Dresden) and choirmaster Mr Matthias Grünert of the Frauenkirche have belonged to it. 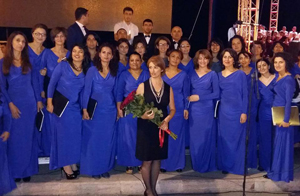 Nina Grogoryan in front of her choir

This activity is part of the project Transkaukazja and is supported by the Cultural Foundation of Saxony, and the programme ‘Wir für Sachsen’.