On 8 July, the Dresdner Nachbarschaften went on a discovery tour in Prohlis. How does it feel to live in hire? What is the neighbourly cooperation like? How is the public space used? What is the historical background?

The prefabricated housing area of Prohlis has a difficult reputation and is considered a “district with special development needs” in the urban development promotion programme. Ms Stein from Querformat e.V., a non-profit self-help association for the socially and financially disadvantaged, is just the right person for the guided tour of the district.

It is a colourful gathering on a Friday at the beginning of July: a father with his primary school-aged daughter, a young man, three older ladies, a couple and a group of adults who seem to know each other well. There are 17 people in all.

The meeting place is the KIEZ in the Prohlis Centre. It is run by the ZUHAUSE IN PROHLIS e.V., which was founded in 2020 and grew out of a cultural and art project by the Societätstheater, Prohlis neighbourhood management and other Prohlis actors. The inviting rooms at the entrance to the shopping centre offer a wide variety of initiatives the opportunity to hold events. It is an open place for exhibitions, films, talks, making music together, concerts and theatre performances.

We walk through the large shopping centre towards Palitzschhof. On the way along a busy street lined with high-rise buildings, we learn that the young man was virtually persuaded by his neighbour from shopping to take part in the district walk. Martin is 21 and has lived in the high-rise building in Prohlis since 2013, where Christl, 74, has lived since 2004 and her boyfriend Günther, 66, since 1989. For many years now, there has been a lively neighbourly exchange, with cakes and pies moving from floor to floor for birthdays and other celebrations.

The Palitzschhof stands out among the modern houses like a relic from ancient times. It is the last remaining farmstead of the old Prohlis village centre. One of the two historic buildings is cordoned off by a construction fence – this is where the new Prohlis community centre is to be built by the beginning of 2024 as a cultural and neighbourhood centre under the auspices of the youth art school.
The second building was renovated more than 20 years ago. Since then, the ground floor and first floor have been home to a branch of the Dresden Youth Art School. Unfortunately, no one is there; only through the glass entrance door can the participants catch a glimpse of a bright, large room.

The second house was renovated more than 20 years ago. Since then, the ground floor and first floor have been home to a branch of the JugendKunstschule Dresden. Unfortunately no one is there, only through the glass entrance door can the participants catch a glimpse of a bright, large room.

The Palitzsch-Museum is located in the converted attic. Here the walkers are greeted personally by the museum director. Mr Neukirch explains the structure of the exhibition, which is about local history. It is a long and interesting history from the first traces of settlement 7,000 years ago to the prefabricated housing estate of the GDR era, which is presented very vividly in the exhibition. The life and work of the Prohlis farmer and natural scientist Johann Georg Palitzsch (1723-1788), who achieved Europe-wide fame with his scientific activities during his lifetime, is also part of the exhibition. The main attraction of the museum is dedicated to astronomy as the main subject of his research: a digital planetarium with a cultural-historical excursion on the astronomical world view. In the course of the lecture on constellations and earth observation, it turns out quite incidentally that Martin is the only one in the group who knows that Dresden is the fourth largest city in terms of area nationwide.

At the construction fence in front of the building, there is a look back at the recent history of the future community centre, as individual participants rave about the beautiful and lively time with projects, exhibitions, cultural events, concerts and festivals. There was even a recording studio that could be used by young and old alike. We are talking about the period from 2007 to 2012, when the association Idee 01239 e.V. implemented a diverse programme at this location, involving national and international artists, with the aim of promoting exchange between people in the urban space of Prohlis. From 2009, this work was supported in good neighbourliness by the association Querformat e.V. with a focus on social issues. It is hoped that the new community centre will be able to fill this gap with its offerings.

It was during this time, more than ten years ago, that the house music group came into being, which still meets every Friday to sing together in the Palitzschhof – at least when it is not taking part in a district tour as it is this Friday. Five of the ten choir members are there. For one of them, Karl-Heinz, 72, singing is a special passion: “Singing is nicer than shopping!” he says enthusiastically and reports that he has also been performing as a soloist at events for many years. With music from a CD, he has been singing his favourite hits at various events for many years, such as “Rote Lippen muss man küssen”, “Butterfly” and “Ganz in Weiß”. Once, meeting a lady inspired him to write and compose a hit song himself. He was also a referee in a sports club. And he is involved in the Prohlis citizens’ initiative.

The Prohlis library is reached just before closing time, yet the two friendly staff members take time to greet the group and introduce the facility. With 425 square metres, the library has had a very good location directly at the Prohlis Centre since 2003. The move from the smaller previous neighbourhood was made with the help of the „Soziale Stadt” funding programme.

On the road again, a couple from the neighbouring district of Plauen tell us that they like to come to events and festivals in Prohlis. One festival, they remember, was dedicated to the Prohlis „giant feet“ – along Herzberger and Berzdorfer Straße, the gardeners laid out the green borders in the shape of giant feet, which can only be seen from above. During the said festival there was, for example, a 35 m long giant scarf. It was knitted by the handicrafts group of the Querformat e.V. association and very impressively decorated one of the high-rise buildings from top to bottom.

At Malteser Treffpunkt Prohlis in Berzdorfer Straße 20, the director Michaela Platz welcomed us and introduced the programme. This includes services for people of all cultures in the district. The friendly rooms offer opportunities for meeting, exchange and information. Much of the work is done with the help of volunteers. The neighbourhood café, an open meeting place for people from the immediate neighbourhood, is entirely dedicated to the theme of neighbourhood, where experiences can be exchanged and new contacts made in a relaxed atmosphere.

Even the unexpected can be marvelled at during the joint stroll to the next stage, when a few shy neighbours, namely some rabbits, hop across the path to disappear again in the tall greenery between the high-rise buildings.

The rooms of the Querformat e.V. association at Herzberger Straße 6 are cramped but cosy. Founded in 2009, the association moved into the Palitzschhof in 2012 after its time there. Office supplies, a music system, handicraft materials, games, handicraft supplies, books and much more give an impression of the diverse offers of the institution without words. The motto above all is: “It’s not bad to fall down, but you mustn’t stay down”. The services offered address different interests: the self-help association for the socially and financially disadvantaged offers counselling on all aspects of Hartz IV as well as assistance with the authorities. In addition to information events and seminars, open meetings are also held to give isolation and loneliness no chance. A cabaret stage for concerts and book readings is also part of the services offered by the association, which is not only active in its own rooms. With thematic district walks and playground hikes, residents are to be made more familiar with their own district and playgrounds in the city area. The fact that all these activities were initiated by two people, the Stein couple, and are kept running with the support of many volunteers, is hard to believe and very much to be admired.

Through the back exit we continue towards the community garden. After two hours of walking, everyone is now looking forward to a rest and refreshment in the greenery. The path leads past the Prohlis church, which was built as part of the church building programme “Churches for New Cities” and was consecrated in 1982. The community centre of the Evangelical Lutheran church congregation hosts church services, discussion groups and groups.

In the community garden, a long table in the green awaits the walkers – colourful fruit and vegetables on the plates, water with fresh herbs in the jugs. Everyone obviously enjoys sitting in the beautifully designed green oasis after the long exploration tour through the high-rises. The various individual and communal beds give the impression of a colourful community of users who enjoy gardening. Two of the hosts tell how it all came about. The construction of the socio-spatially oriented community garden with an area of approximately 1,000 square metres began in May 2017. Fifty trees were planted by Dresden schoolchildren right at the start. Bees were also kept for a while. The focus is on good cooperation, neighbourly solidarity and respectful treatment of nature. All interested people, even those without gardening skills, are welcome. At the moment, there are about 40 people from one to ninety years old who garden on Georg-Palitzsch-Straße under the auspices of VSP Dresden (Network of socio-educational projects). In addition, workshops, events and creative projects also take place at the green space. The community garden is networked with associations and initiatives in the district. Despite occasional hostility due to its intercultural orientation, the community garden consistently stands for respectful interaction between people, solidarity, co-design of the district and identification with the place where one lives. How the concept counteracts individual loneliness and isolation can be clearly felt at the long table where community gardeners and district explorers sit happily together.

Asked about neighbourliness at home, Ingrid, 77, Adina, 72, and other Prohlis residents say that neighbourliness used to be better. Annual festivals used to be celebrated together. Not all of the newcomers say hello. One young man who always helped has unfortunately moved away. But there are also good things to report – four women have been living on one floor for many years, they know each other well and often do things together.

At the end of a day full of discoveries and experiences, a spontaneous concert by the Prohlis House Music Choir in the community garden, of course with a solo performance by Karl-Heinz, shows that neighbourliness in Prohlis can also be green and musical. The participants of the walk, who came from the district, have deepened the connection to their neighbourhood, all have gained new insights. It is good to live in Prohlis, a modern district with millennia-old roots and a famous scientific personality in its history. Neighbourly coexistence is diverse and colourful. The public space is used jointly by many initiatives with supportive and cultural offers and opportunities for participation. 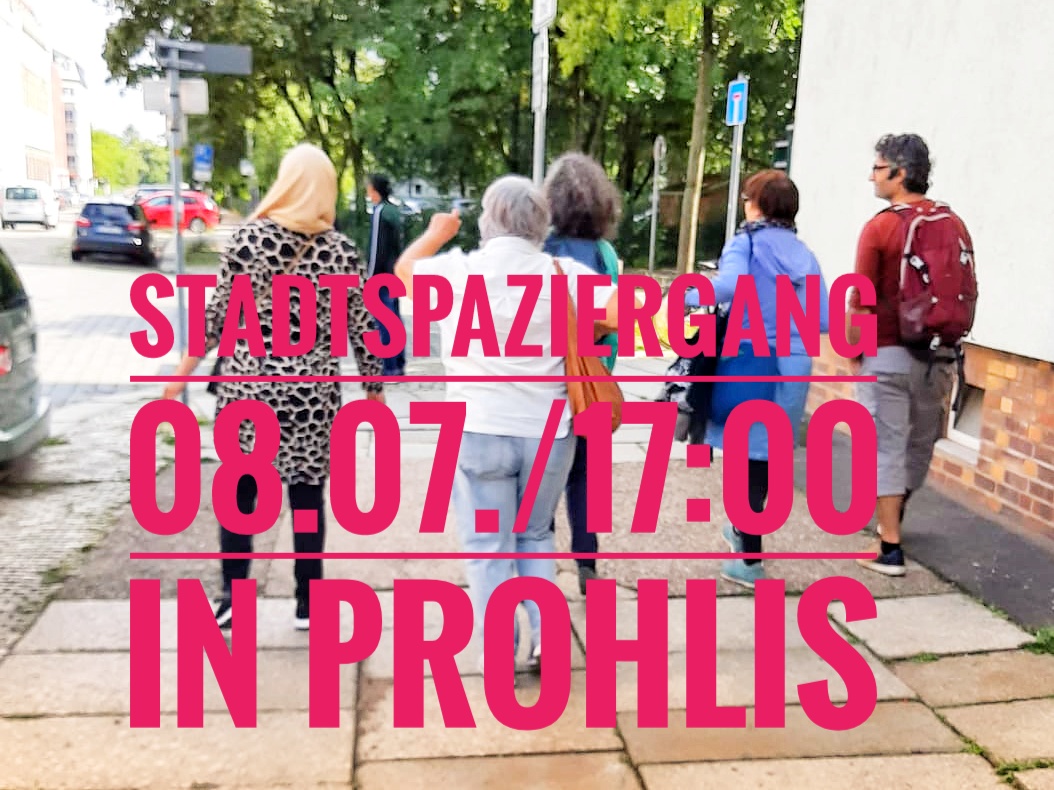 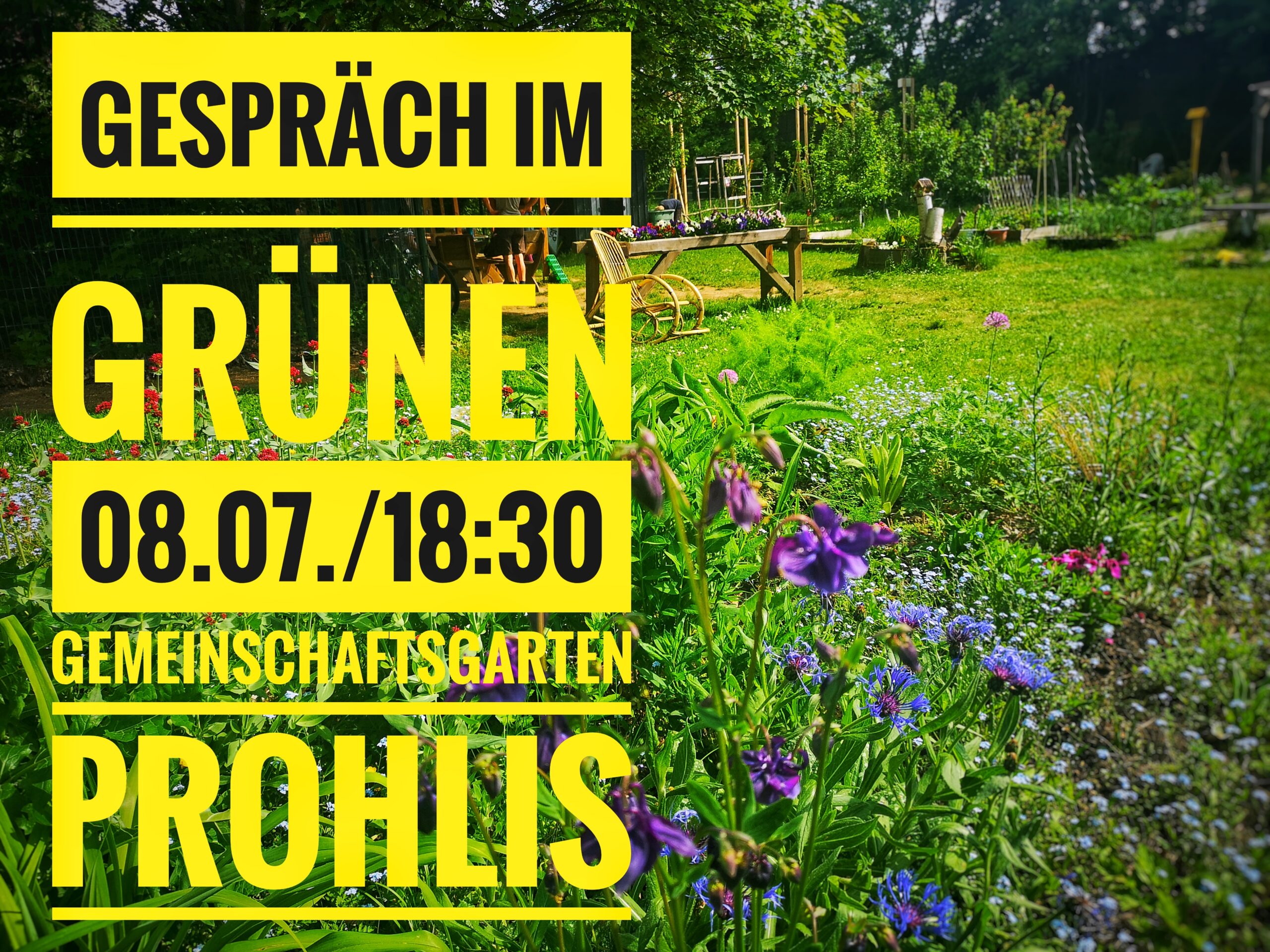 In our storytelling cafés and discussion groups, district tours and workshops, we want to encourage you to tell stories and develop visions.

The project is funded by the House of Resources Dresden+